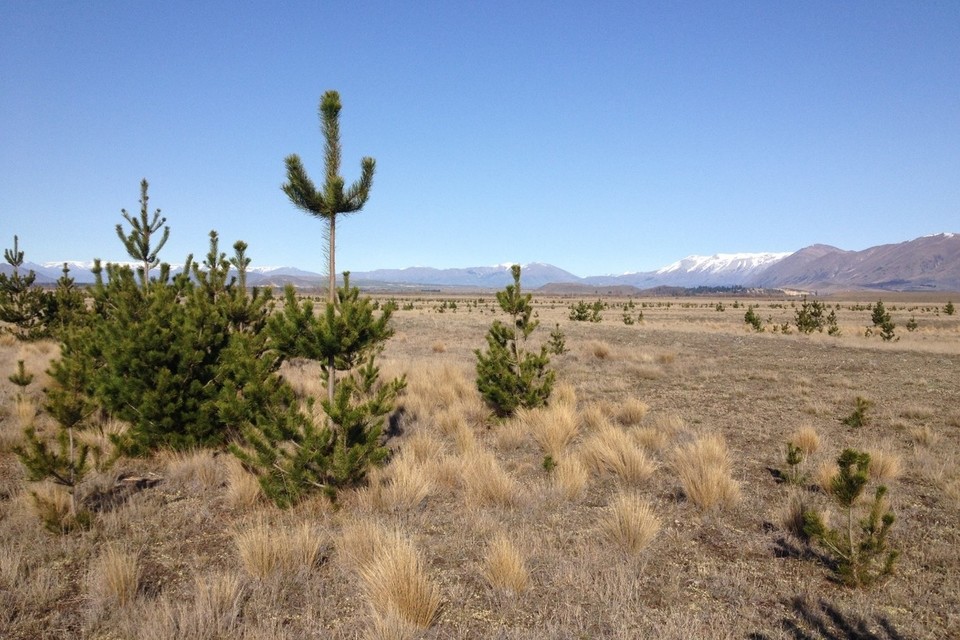 A wilding pine is simply a pine tree that has not been planted, but has popped up by itself, after its seed has dropped from a cone and been blown on the wind to a place where it is not meant to be. There are several species of wilding pine in the Mackenzie Basin that are particularly invasive and are recognised as pests in accordance with the National Wilding Conifer Control Programme and the Canterbury Regional Pest Management Plan. Here in the Mackenzie Basin the main species of wilding pine are Contorta Pine, Ponderosa Pine, Corsican Pine, Mugo Pine, Scots Pine, Douglas Fir and Larch.

If left uncontrolled and allowed to spread, these species of wilding pine can completely take over the landscape. They can form dense forests that acidify the soil, have a thick canopy on top and can shade out the native plants and animals that once thrived. They soak up ground water in the soil, drying out natural tarns and wetlands, lowering river flows, affecting underground aquifer levels and productivity of the land for farmers. This has potential to affect hydroelectricity production too.

Wilding pines pose a significant fire risk because they are highly flammable. Due to the range of tree sizes in a wilding invasion and all the needles and dry twigs on their branches, they create a ladder of easily ignitable ‘fuel’. We all saw the effect of this in the Pukaki Downs fire, and to a lesser extent the Ohau Village fire last year. In winter they cause icy patches on our roads wherever they create shade and can reduce our vision at intersections and on bends in the road, making driving more dangerous. Most mature wilding pine forests are not profitable to harvest since the trees within them can often be different species, ages and shapes and have not been thinned, pruned, and are not easily accessible. For these reasons harvest is often difficult, and costs more than the trees are worth.

Trees are important in providing shelter and opportunities for recreation and income, but it is vital to plant the right type of tree in the right place. There are many alternatives to wilding pines that can be planted in the Mackenzie Basin, including trees that are less flammable, less invasive, and less of a threat to our unique natural ecosystems. The threat that wilding pines pose to New Zealand’s ecosystems is so great that our government does not recognise most wilding pine species in the New Zealand Emissions Trading Scheme. The cost of having these trees in our environment far outweighs any benefit they can provide by removing carbon from the atmosphere. Our environment is simply better off if we remove the wilding pines from it.

Andrew Simpson, Tekapo farmer and Chair of the Mackenzie Basin Wilding Tree Trust says ‘it is pleasing to see that the Crown has, over the past five years, recognised that wilding trees are a major issue, and have agreed that it is a national problem. This recognition came with an initial grant of $16 million for the first four years. This was increased last year to $100 million for the next four years. With this amount allocated we will see significant inroads made into infestations in the Upper Waitaki. It is important to maximise this funding, as we all need to play a part in planting the right tree in the right space and when out walking, if we see a wilding seedling, pulling it out. We will beat this with community support.’

The Mackenzie Basin Wilding Tree Trust will be working hard this year to raise awareness of the threat that wilding pines pose to our Mackenzie communities, ecosystems, and local economy. We will be providing information and support to you, the landowner, to help you identify wilding pines on your own property, and to help you decide how to deal with them. We will also be providing opportunities for you to get involved beyond the boundary of your own property by running volunteer days where you can join other locals to help cut down wilding pines in and around our township areas. The first of these volunteer days are in the pipeline for May 8th in Twizel and May 15th in Tekapo.